I Want Custody of my Children – But What Does that Mean?

I Want Custody of my Children – But What Does that Mean?

Home
Children
Divorce Made Simple
I Want Custody of my Children – But What Does that Mean?

If your case involves minor children, a determination of the custodial arrangement that is in theirs best interests will be made. In Nebraska, there are two types of custody – legal and physical. Each serves a different purpose, and there can be variations on how legal and physical custody is awarded. Remember – the paramount concern in the court’s eyes is which arrangement will be in the best interests of your children, not what is in the best interests of the children’s parents. 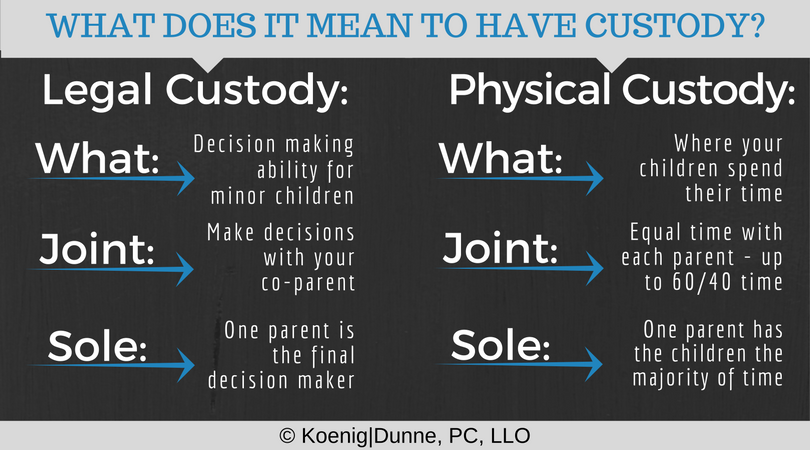 If a parent has sole legal custody, he or she is the primary and final decision maker for these important decisions.

If parents share joint legal custody, then they will share equally in the decision making for their children. The Nebraska Parenting Act defines joint legal custody as the “mutual authority and responsibility of the parents for making mutual fundamental decisions regarding the child’s welfare, including choices for education and health[.]” Joint legal custody is generally recommended when the parents are able to effectively communicate with one another and have similar parenting philosophies.

The Nebraska Parenting Act defines joint physical custody as the “mutual authority and responsibility of the parents regarding the child’s place of residence and the exertion of continuous blocks of parenting time by both parents over the child for significant periods of time[.]” Typically, a custodial arrangement is considered “joint” if the parents share time with the children equally (50/50) or up to a 60/40 basis.

The designation of sole or joint physical custody has a direct impact on parenting time and child support. Be sure to talk with your experienced family law attorney about these implications before agreeing to any arrangement.

Note: if one parent is awarded physical custody, that does not mean that he or she will have the children 100% of the time. The non-custodial parent will have the right to parenting time which will be spelled out in your parenting plan.