We are proud of all the work our firm does in the communities we are connected with through our work and special interests close to our hearts. Here are some of the highlights: 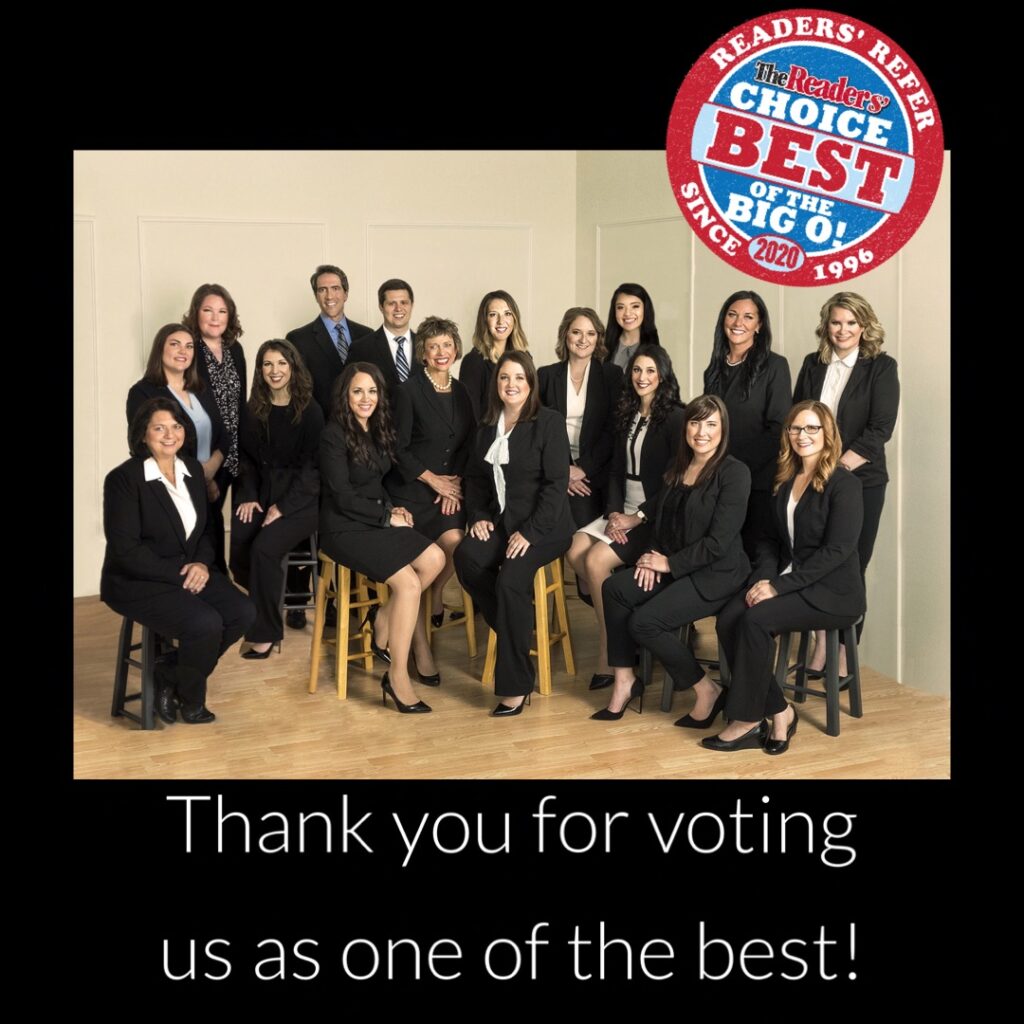 Thank you for voting for us another year as one of the best in Omaha! 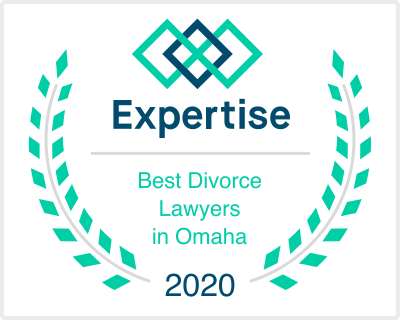 Thank you Expertise.com for naming Koenig|Dunne among the top divorce lawyers in Omaha. We were recognized as outstanding in the areas of reputation, credibility, experience, availability and professionalism. 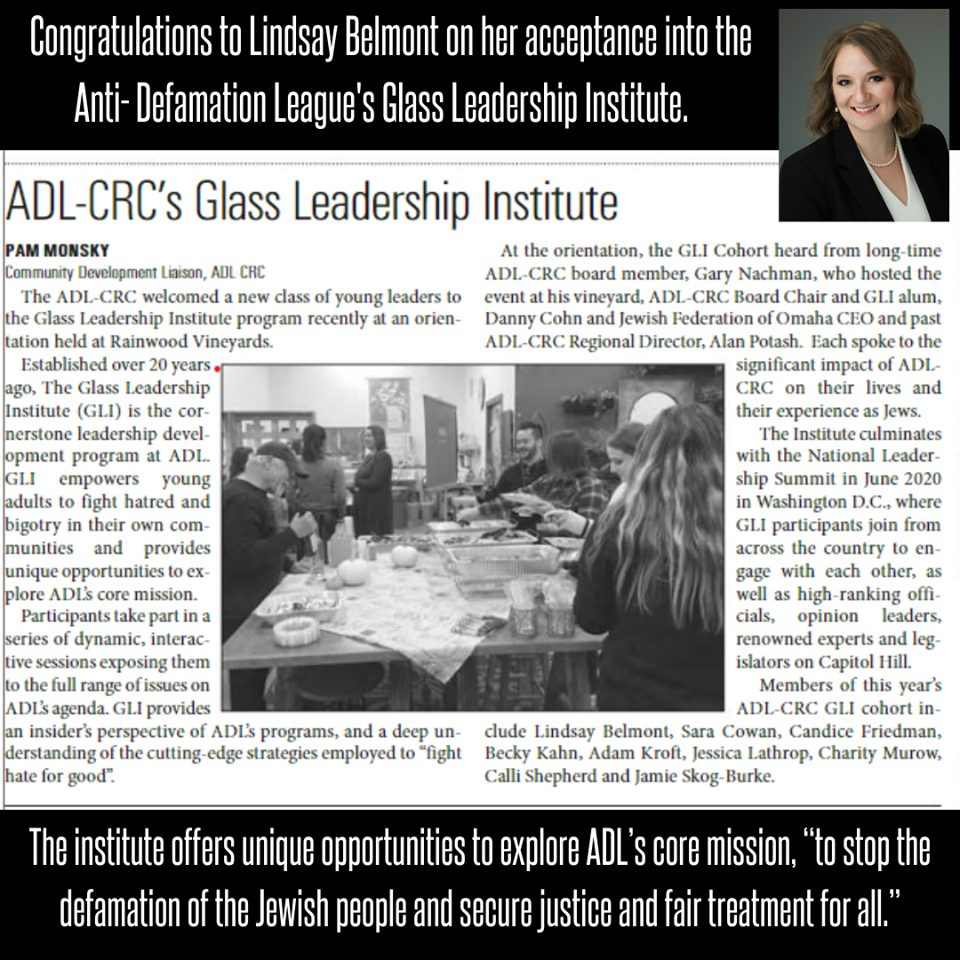 Congratulations to Lindsay Belmont on her acceptance into the ADL – Anti-Defamation League‘s Glass Leadership Institute. 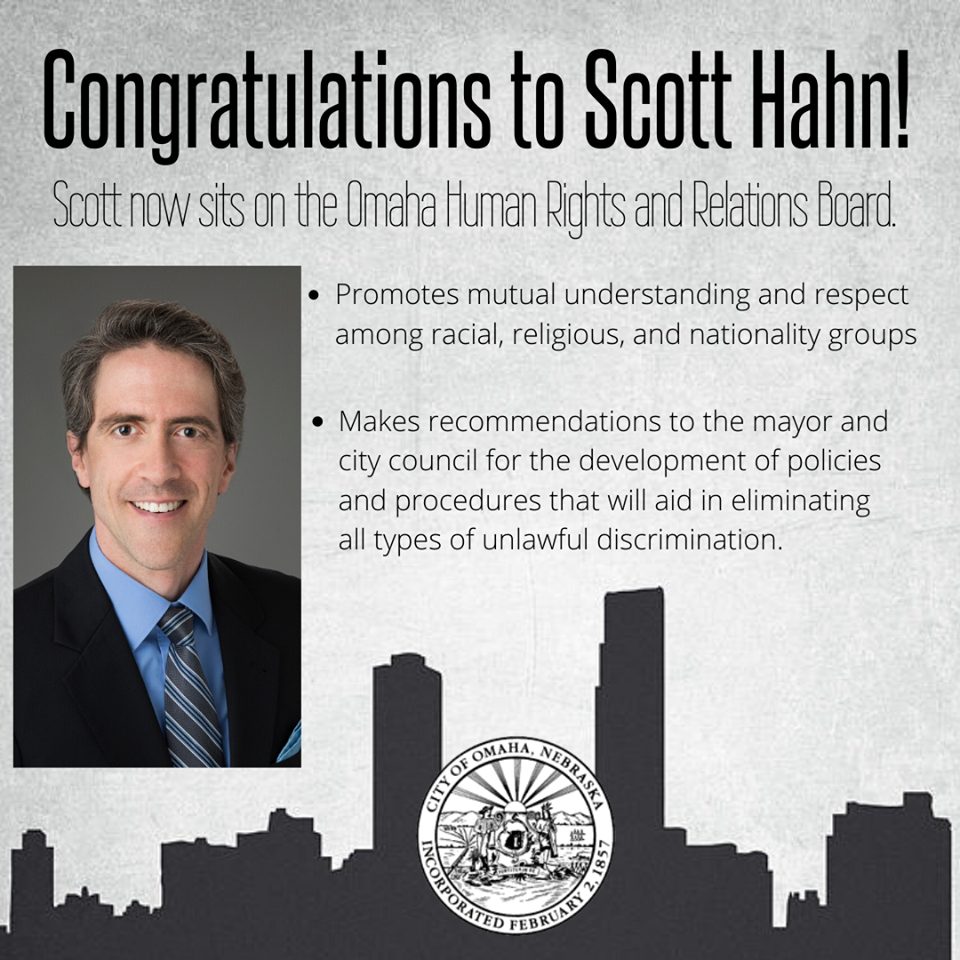 Congratulations are in order to our very own Scott Hahn for being appointed to the Omaha Human Rights and Relations Board! Patrick Patiño was selected from attorneys across the state as a Fellow of the Nebraska State Bar Association’s Leadership Academy.

Congratulations, Patrick! This is an incredible opportunity for personal and professional growth – we are confident you will thrive. 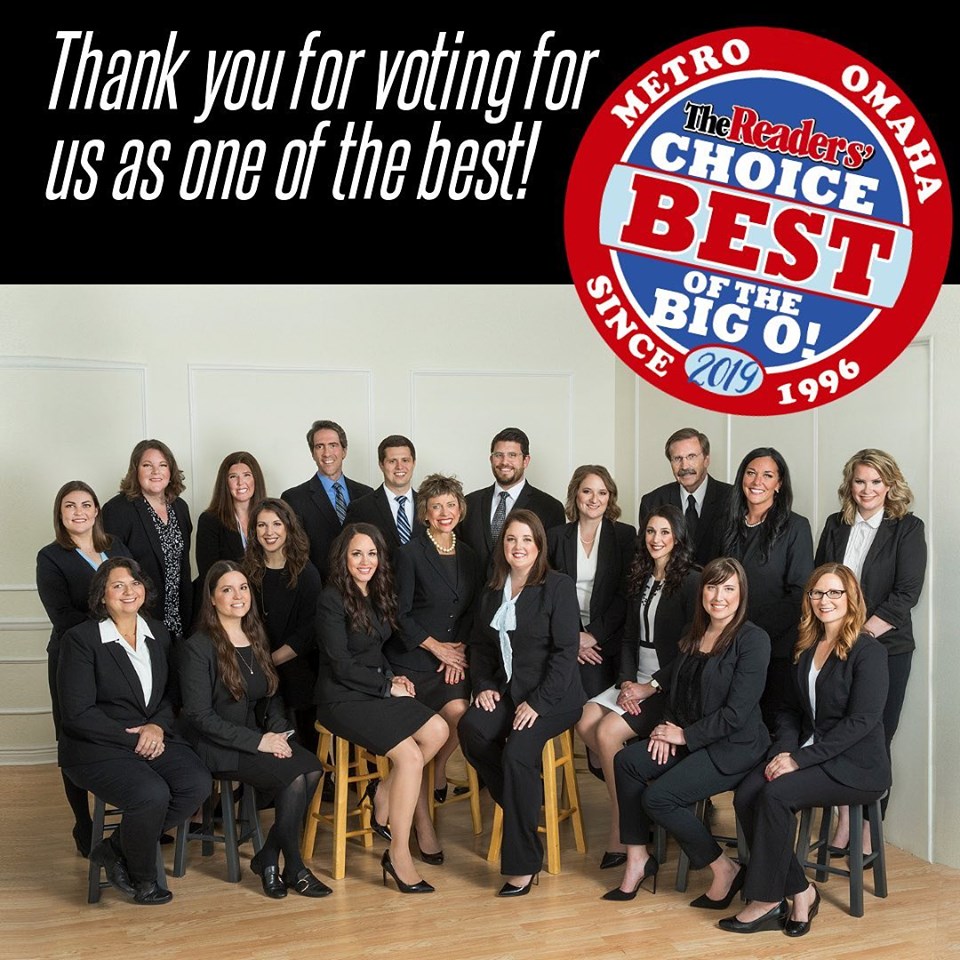 You like us! You really like us! Thank you, from the bottom of our hearts for voting for us another year as one of the Best of Omaha! 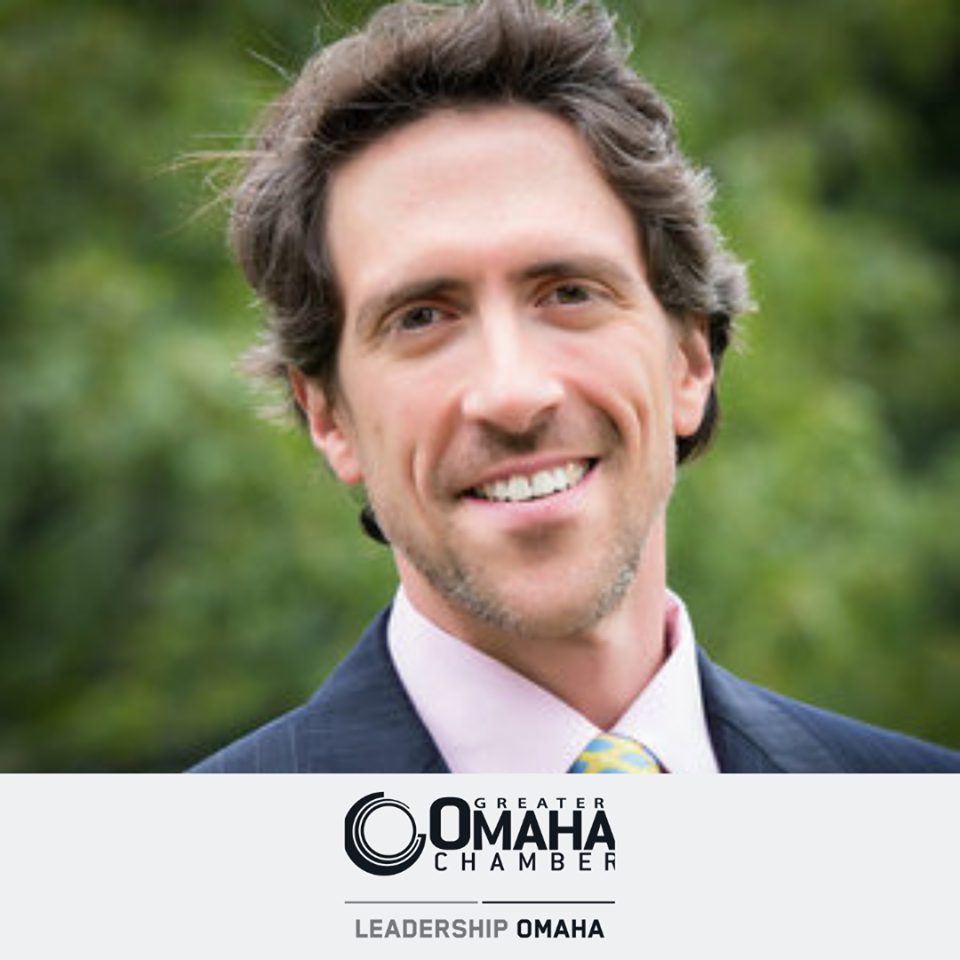 Scott was chosen based on his demonstrated community involvement and vision for the future of Omaha. 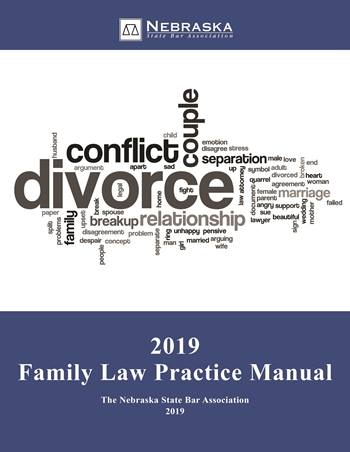 Our attorneys are once again leading the change in the legal experience by contributing to the creation of the Nebraska State Bar Association‘s Family Law Practice Manual! 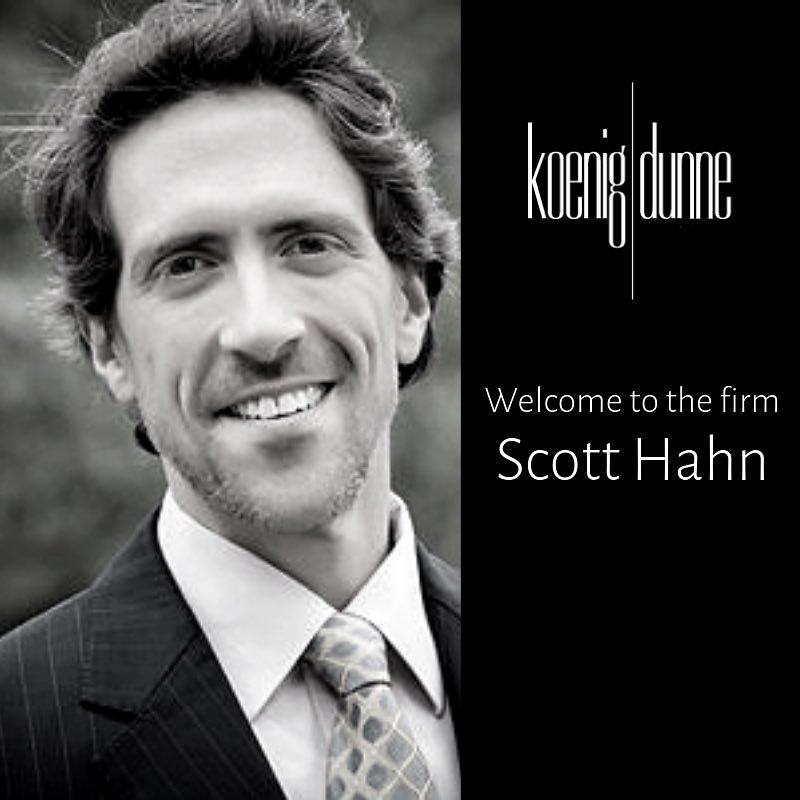 We are pleased to announce that Scott Hahn is joining the firm. Scott comes to us with 12 years of experience in the area of family law, spending much of his career as an advocate for domestic violence and sexual assault survivors. Koenig|Dunne and our clients will benefit from Scott’s experience, talent, and shared values 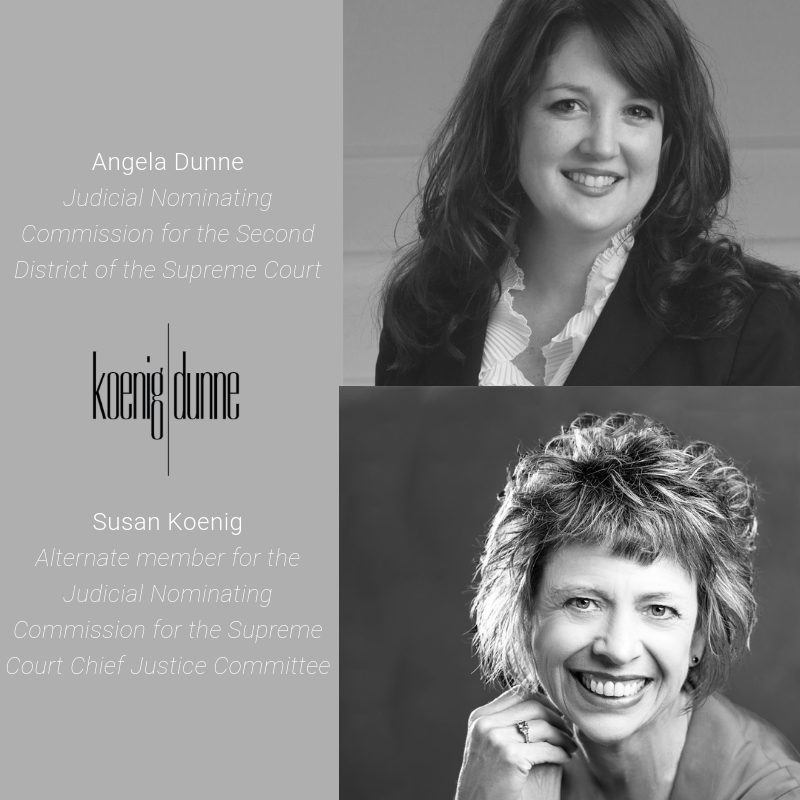 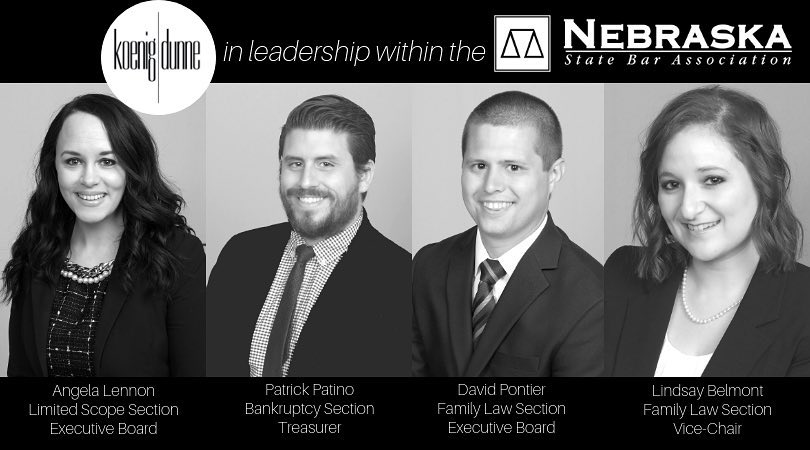 This past week, four of our attorneys were elected to leadership positions within the Nebraska State Bar Association. We are proud of their commitment to improving the justice system for our clients and the legal community.

Lindsay Belmont was selected to this year’s Nebraska State Bar Association’s Leadership Academy. The mission of the NSBA Leadership Academy is to develop the leadership skills of the participants to allow them to make greater contributions to the legal profession and their community.

Congratulations on being selected, Lindsay! We know it’s going to be a great experience. 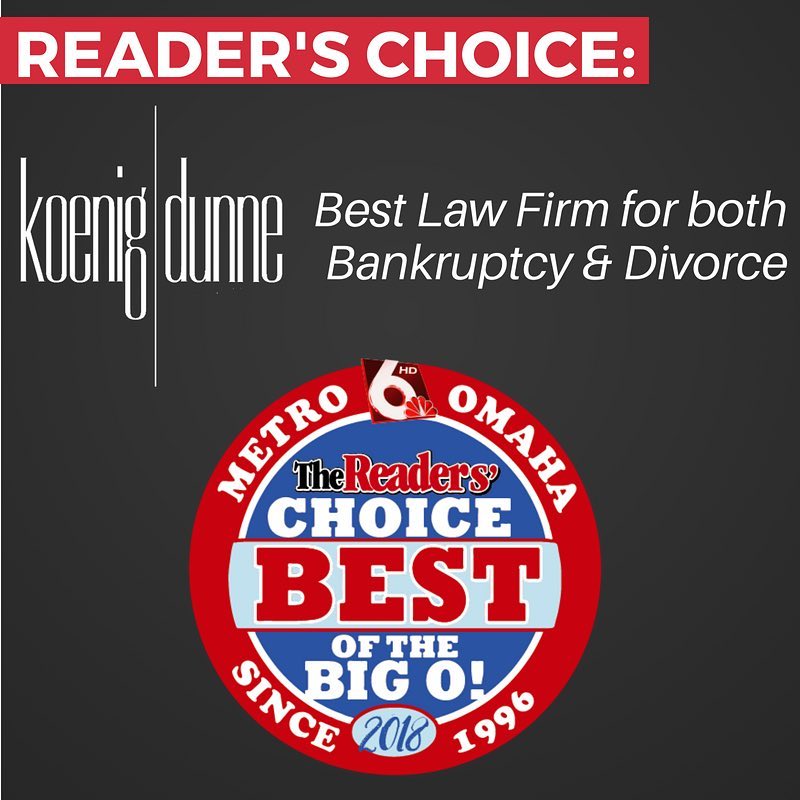 The results are in! We are honored to announce that you have voted us as the Reader’s Choice Best Divorce and Best Bankruptcy Law firm. Thank you for all your support. It is a privilege to be there to provide support when life changes in big ways.

Each year, 12 attorneys from Nebraska are chosen to attend the Dan Jewell Trial Institute. This year, Lindsay Belmont was selected to participate. She prepared well and showed up ready to learn – keeping in mind the benefit to her clients by having the best tools available when advocating for them in court. 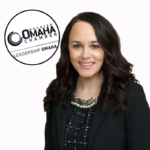 Angela Lennon has been selected as a member of Leadership Omaha Class 41! Leadership Omaha is one of the longest-running community leadership programs in the nation. A program of the Greater Omaha Chamber, Leadership Omaha, established in 1978, is designed to develop effective leaders who strengthen and transform the community. Class members are chosen based on their demonstrated community involvement and vision for the future of Omaha.

Susan Koenig was honored at the 2018 Women’s Center for Advancement‘s Tribute to Women. To have her recognized for the contribution she makes in our community was meaningful for our whole team.

We are pleased to announce that Angela Dunne has been selected to the 2017 Great Plains Super Lawyers list and Angela Lennon has been named a Rising Star.

Super Lawyers, a Thomson Reuters business, is a rating service of outstanding lawyers from more than 70 practice areas who have attained a high degree of peer recognition and professional achievement.

Thank you Omaha for voting us as one of the best law firms in the Omaha World Herald Choice Awards!

We are proud to announce Angela Lennon has been named a partner of the firm. Please join us in congratulating Angela as she assumes her new role and continues to be a leader in the firm and in the law.

Koenig|Dunne is pleased to announce that Howard Duncan and Patrick Patino are joining the firm in our newly formed bankruptcy practice group. We hope you will join us in welcoming them to the firm!

Koenig|Dunne is proud to announce “Transcending your Transition: An Empowerment Series for Women” beginning in January, 2017! Koenig|Dunne has been named Readers’ Choice Best of the Big O’s Best Divorce Attorney by The Reader Magazine!

Angela Lennon has been selected to Super Lawyer’s 2016 Great Plains Rising Stars List. This is an honor reserved for attorneys who have attained a high-degree of peer recognition and professional achievement. The selection process includes independent research, peer nominations, and peer evaluations. Congratulations, Angela!

Lindsay Belmont has joined the firm as an Associate Attorney. Lindsay graduated from the University of Nebraska College of Law in May 2014, earning her Juris Doctor with Distinction. During law school, she served as a law clerk in the areas of family law and public interest. After graduation, Lindsay worked for the Nebraska Child Support Enforcement office. The firm’s clients will benefit from Lindsay’s commitment to excellence in family law.

Angela Dunne was featured in the Omaha World Herald about our building renovation. Real all about it HERE.

Angela Lennon has been elected as the president of the Nebraska Women’s Bar Association. The 2016 focus of this organization will be women in the judiciary, with special input by our very own, Susan Ann Koenig.

We are proud to announce that Angela Lennon is the Chair of the Young Lawyers division of the Omaha Bar Association for 2016. Congratulations, Angela!

Koenig|Dunne Divorce Law was named The Reader’s Best of the Big O! 2015 Readers’ Choice Best Divorce Attorney! Thank you to all who voted for us, we are honored that you value our dedication to doing divorce differently.

Angela Dunne has been selected to Super Lawyer’s 2015 Great Plains Rising Stars List. This is an honor reserved for lawyers who exhibit excellence in practice. Congratulations, Angela!

On April 30, 2015, Koenig|Dunne Divorce Law “broke building” on our expansion project on 13th Street with Aaron Bartek of Traco, Inc., who performed the renovation on the firm’s existing office, and Paul Nelson of PEN Architect

Susan Koenig was named one of the Greater Omaha Chamber of Commerce’s “excellence awards” winners.  She was selected from a larger group of nominees by a committee of past winners and business leaders.
Link: Read More

Christi Leupold has been named the Omaha Legal Professionals Association’s Legal Professional of the Year.  This award is given to a legal professional to be recognized for distinguished professional accomplishments and service including expertise in the legal field, community service, civic and charitable activities and affiliations.

The 8th Circuit Court of Appeals is currently preventing same-sex couples the right to marry in Nebraska by issuing a stay of the preliminary injunction granted by Judge Joseph Bataillon.  ACLU of NE & Koenig|Dunne continue to seek equality before the law on May 12, when the case is scheduled to be heard before the 8th Circuit Court of Appeals. Update: The court has suspended all action on this matter pending the U.S. Supreme Court’s decision on Obergefell v. Hodges

Congratulations to Senator Crawford on the enactment of the Uniform Deployed Parents Custody and Visitation Act.  We are proud of our own Angela Dunne being instrumental in ensuring that the “best interests of the child” standard was clearly defined within this law.

We are proud to announce that effective March 9, 2015 at 8:00 a.m. Freedom to Marry will be granted to all in a ruling issued by Judge Bataillon today. The stay is denied. “It is time to bring this unequal provision to an end.”

Koenig|Dunne is pleased to announce “Transcending Your Transition: An Empowerment Series for Women During Transformation” beginning in January 2015!.  (Registration now closed)

Congratulations to Angela Lennon for being accepted to the Women’s Fund of Omaha’s 2015 Circles group.  The Circles group consists of a select pool of young professional women leaders in Omaha to support the mission of the Women’s Fund, promote networking opportunities for women professionals, and develop leadership skills to serve our community.  READ MORE

AV Rating:  Koenig|Dunne Divorce Law is proud to announce that Angela Dunne has received an AV Preeminent rating through the Martindale Hubbell Peer Review Ratings, which are an objective indicator of a lawyer’s high ethical standards and professional ability. Legal ability ratings are based on performance in legal knowledge, analytical capabilities, judgment, communication ability and legal experience. AV preeminent is a significant rating accomplishment – a testament to the fact that a lawyer’s peers rank him or her at the highest level of professional excellence. Congratulations, Angela on this achievement!  Martindale Hubbell: Angela Dunne

Rising Star:  Congratulations to Angela Dunne for being named one of Super Lawyers Rising Stars for 2014! Only 2.5% of attorneys in Nebraska are selected as Rising Stars!

Congratulations to Angela Dunne for graduating from the Eighth Class of the Nebraska State Bar Association’s Leadership Academy.  The NSBA Leadership Academy is comprised of a select group of attorneys throughout the state of Nebraska to focus on how attorneys can make a greater contribution to the legal profession and our community through leadership.

We are proud to announce that Angela Dunne was appointed to the Child Support Advisory Commission, which will conduct the quadrennial review of the Nebraska Child Support Guidelines.  The Nebraska Supreme Court will review the recommendations of the commission, and Angela is the one divorce attorney from throughout Nebraska who was chosen to serve.

In November, 2013 Koenig|Dunne Divorce Law was voted as the Best of the Big O’s Best Divorce Attorney for 2013.

Thank you for all who voted for us and are committed to doing divorce differently, we strive to always be the best for our clients!