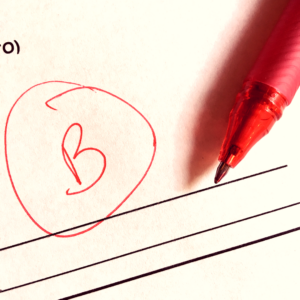 The height of my academic failure arrived mid-way through a semester of political science. Due to my performance, it was prudent that I drop the class. This required a personal visit to the professor known more for his rigor than his relationships with struggling students.

I could feel the shame as I waited my turn outside his small windowless office. This was the first and only conversation we would have. I hoped it would be brief.

I told him my name and that I needed to drop his class. I could not raise my grade up enough by the end of the course. The grade I feared was a B.

I had been surprised to be carrying a 4.0 after the end of my first semester, and then again my second.  I was never an artist or an athlete, but I was decent when it came to academics. School was one place where I knew that if I worked hard I had a chance to feel good about who I was. I got attached to the idea of leaving university with that nice number intact.  I didn’t want to risk its loss by receiving anything less than an A for the course.

Permission was granted. I dropped the class. But I held on to the shame.

I walked away from an opportunity I did not yet know how to name: being less than perfect. I missed the chance to discover that I could have less than an impeccable record and still survive.  I postponed my painful lesson which law school was more than happy to give me when I received my first D my freshman year.

Throughout life, my excellent GPA never scored me a job, a date, or a dollar so far as I know. Yet at the time I held on to it with all my might.

How often in life have I hid the truth so that I could leave the world with an illusion of a superwoman of sorts?  When I stayed in that unhappy marriage for years? When I exhausted myself to the bone as a young mother rather than let anyone know I needed help? When I crammed my clutter into a closet when company arrived?

I was an outstanding scholarly student but I had a lot to learn when it came to being wise. With life and time as my teachers, I see that a B may not be perfect, but sometimes it’s simply the best.

Do you ever confuse perfection with excellence?

Are you holding on to a status that is not in keeping with your best self?

Are you exhausting yourself keeping up appearences?