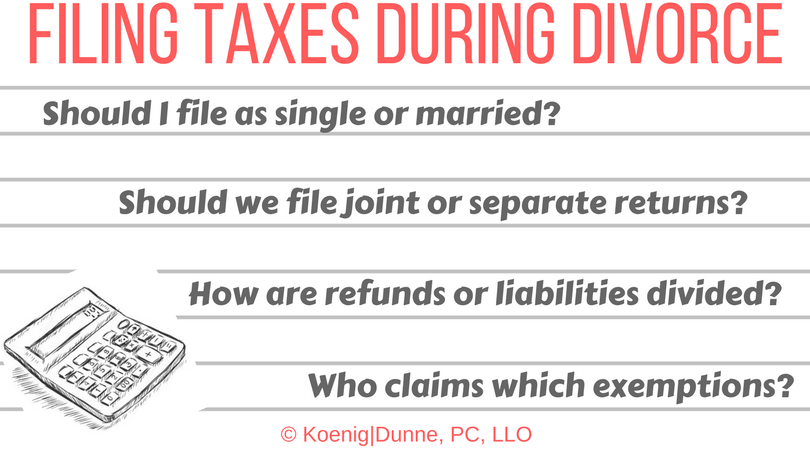 As April 15th creeps closer, spouses often have questions and concerns about how to file their taxes both during divorce and after.

What filing status should I report on my taxes?

Who gets to claim our marital deductions this year?

How is our tax refund divided?

Here are some answers to tax questions commonly asked by spouses going through divorce.

Which Marital Status May I Choose?

Whether you may file as single or married is determined by your marital status on December 31st of the tax year. For example, if your divorce becomes final on October 1, 2018, you may not file as married for 2018.

When Is My Divorce Considered Final for Tax Purposes?

Should I File a Joint or Separate Tax Return?

Unless a court order says otherwise, you may always file a separate tax return without coordinating with your spouse. However, marital tax burdens are usually lessened by filing a joint return. To do so, you must obtain your spouse’s consent. But it is important to note that if you have any concerns about your spouse’s truthfulness in his or her tax filings, then you should strongly consider filing separate returns.

How Are Tax Refunds or Tax Liabilities Divided?

Who Gets to Claim Tax Deductions When Filing Separately?

Unless a court order says otherwise, the spouse who files first gets to claim all tax deductions. Keep in mind, however, that if these deductions correspond to a marital tax liability (mortgage interest, etc.), then a court will likely compensate the non-claiming spouse elsewhere in the division of marital assets.

When making any tax decisions during divorce, it is important that you consult with your tax adviser and your attorney. Your legal team at Koenig|Dunne is aware of the many tax issues that you will face during your divorce and is here to help advise you.