The First 5 Legal Documents of a Divorce Explained

The First 5 Legal Documents of a Divorce Explained 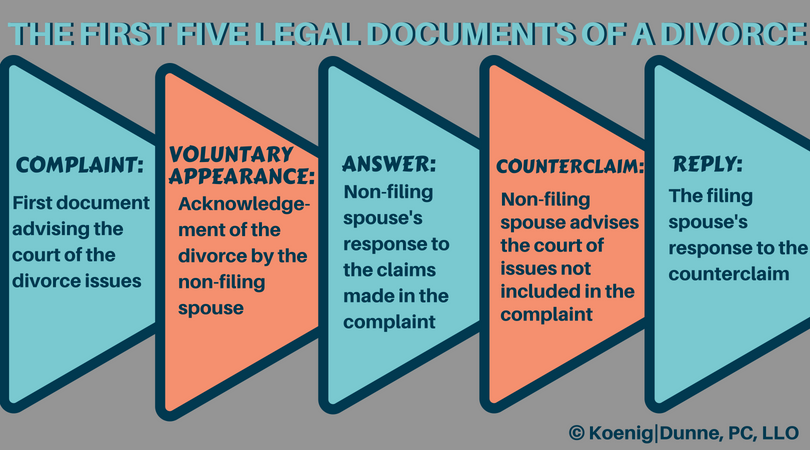 The flood of legal documents filed at the beginning of a divorce can seem both overwhelming and incomprehensible. These legal documents are often written in thick “legalese,” and their purposes are not always discernable without context.

Here are simple explanations of the five legal documents commonly filed at the beginning of a divorce:

The first legal document filed in a divorce is the “complaint.” The person who files this document is referred to as the “Plaintiff,” while the non-filing spouse is referred to as the “Defendant.” These labels are not significant in terms of legal advantages. The purpose of the complaint is to advise the court that a divorce has been filed and what issues are involved (property division, alimony, children, etc.). Finally, the complaint informs the court what the filing spouse would like to be awarded in the divorce.

It’s easy to become overwhelmed with the initial legal documents filed in a divorce. Your legal team at Koenig|Dunne is here to explain the nuances of these documents to enlighten and empower your decisions from the beginning of the divorce process to its end.