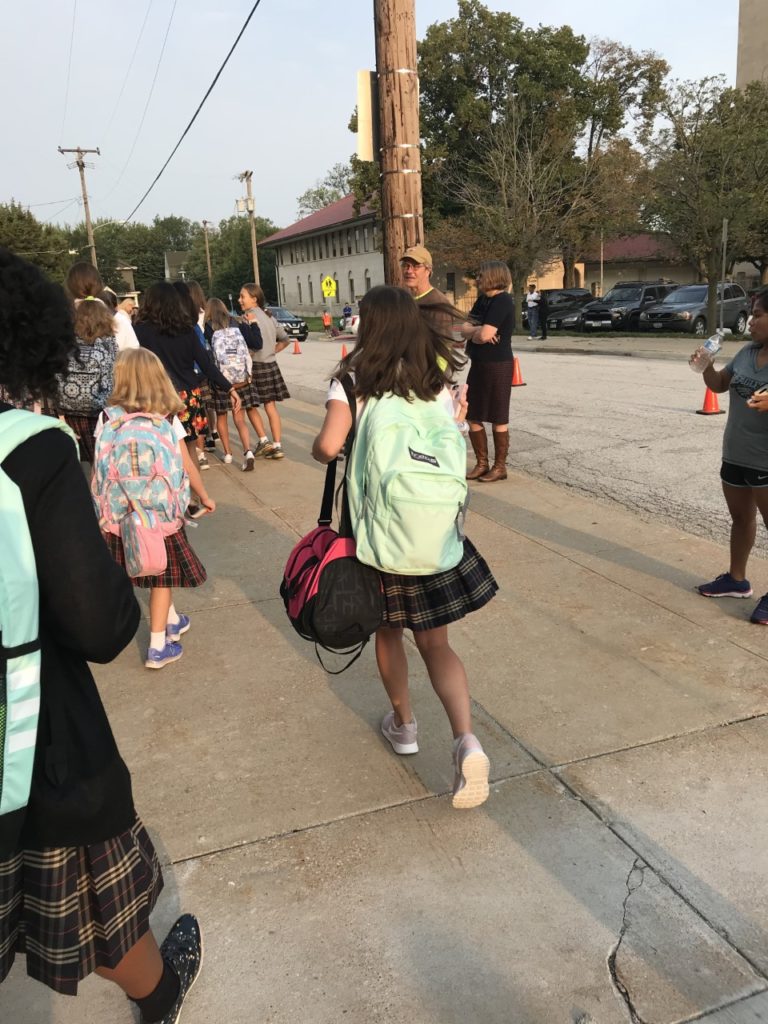 An unexpected traffic detour derailed my perfect attendance for her first day of school.  For 11 years I have been photographing our daughters bright-eyed and bushy-tailed on their first days of school – as the family memory keeper and photobook maker.  This year was unlike the others – one daughter started at a high school several days before the other and a couple of miles now separate the two during the school day.  No more do we have a dual first day of school photo.  I knew that my youngest daughter had been sensitive to everyone asking her older sister with extreme enthusiasm about starting high school.  It upped the ante for me to be all smiles and supportive for my youngest finally getting her chance to be in the spotlight.  Now a traffic delay was causing my heart to constrict with anxiety.

I walked/ran as fast I could along the worn and cracked sidewalks in my ridiculous three-inch heels.  I was starting to sweat on a 60-degree morning.  “Please don’t let the bell ring” was the prayer racing through my mind faster than the stock exchange ticker.  To my glorious exhilaration I made it!  I snapped a quick photo of Sophia and her dad, he took one of she and I, and then I turned to take the annual photo of just her– but she had turned on her heel and off she went to join her class.

Her sudden movement stung.  I felt like I was being punished for being tardy.  I called after her and she yelled back that she needed to go in with her class (which was true).  My former spouse stood next to me so I willed myself with the strength of Wonder Woman not to cry.  But as we know, our spouses remember us.  He leaned over and said “I got a picture of her by herself.  I will text it to you.”  Gratitude gushed over me.  How lucky was I that my ex handed me this gift?

Earlier that week our attorney, David, was telling me how a settlement agreement had fallen apart because in the midst of negotiations – school had started. This couple had children together and the parent who snapped the back-to-school photo refused to share it with the co-parent who had been heartbroken about not being able to be there.  That one action revealed co-parenting was not happening in good faith and they no longer relied on the spirit of the settlement.

I cannot speak to the intention of the parent unwilling to take a few seconds and share a snapshot, but I can speak to the importance of not letting the small moments pass by when instead of ignoring your child’s mom or dad, you acknowledge them.  Sharing a photo of your child is a sign acknowledging the other parent’s status. And then you are not only acting in good faith, but preserving it.