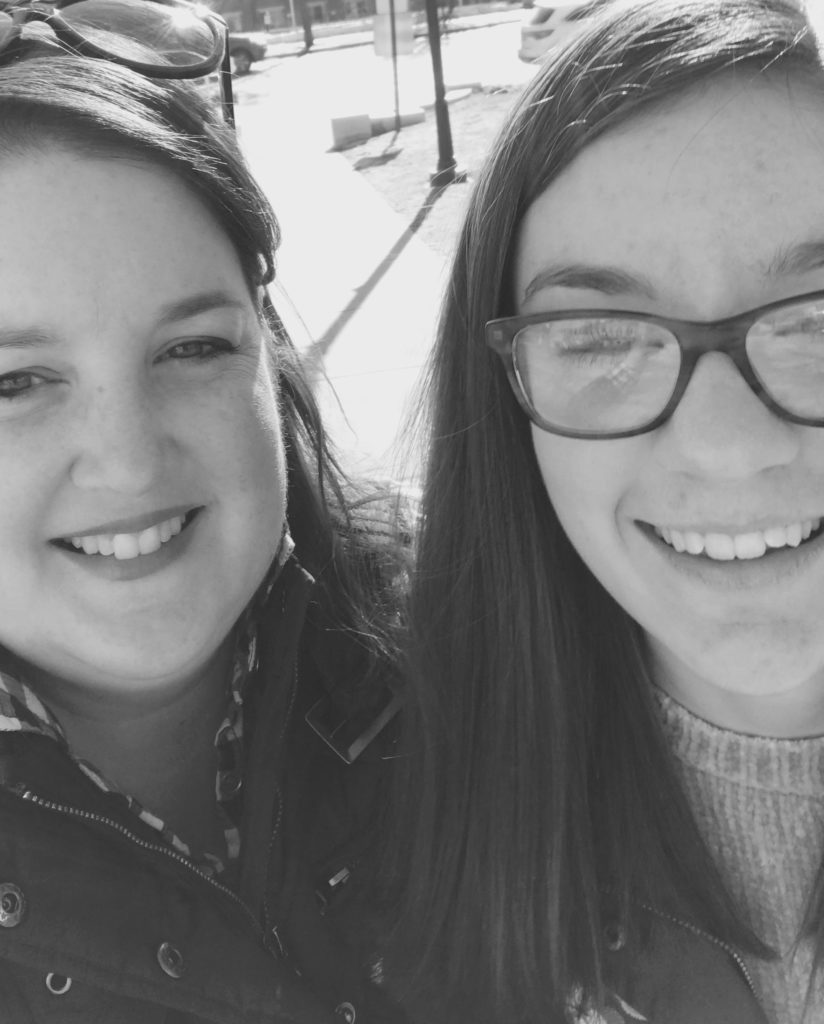 We were both nervous.  When I reached for her hand in the car to offer a reassuring squeeze, the clamminess I felt from hers was a sure sign that her stomach was fluttering.  She was facing the unknowns of a new school without knowing another soul.  I was facing the unknowns of how I was going to navigate these last years of hers as she speeds too fast toward adulthood.

Last week I wrote about my eldest daughter’s upcoming high school open house.  I described my emotions as I approached the day and wished that I wasn’t a divorced parent so that I could have the support of a spouse – my daughter’s father – who shares the same love I have for her.

When the day arrived, we kept ourselves busy and distracted until it was time to depart.  As we walked up to the giant stone building up on the hill, I pulled her aside to snap a quick photo.

She feigned annoyance but smiled into the camera.  As she did, she released some of her pent up nerves.  I hugged her and we moved on.  The focus on her that I had hoped to have was the right one.  I felt affirmed.  She needed her mom.  I needed a box of tissues.

A dear friend was texting me throughout.

“Hang in there mama. This is a good thing.”

He then sent me a reminder of a funny memory to make me laugh and relax.  It worked.  I felt steadied and grounded by his support.  I felt his symbolic hand hold.  My pseudo spouse #1 had come to my rescue.

The next morning after the big event, my sister arrived with her enthusiasm gushing about Anna starting high school.  She said the things we both needed to hear.  “You are going to love it!  Ohmygosh, look at all of these fun extra-curricular activities!!!  Yay!”  My pseudo spouse #2 relaxed me and offered perspective.  I started to get excited about the future.

That night my best friend of 32 years called.  “Oh my heart aches for you.  I know how difficult and scary this is for you.”  Her sincere empathy – even though from miles away – felt like a hug.  I cried and my pseudo spouse #3 loved me.

I had been fretting the week before that my needs would not be met during this milestone.  The day after it was over, I learned a valuable lesson.  I have several “spouses” who support me on my journey.  The support I thought I needed in the form of one person, instead presented in three.  I felt thankful I had declared I was going to be present to my daughter.  In doing so, I in turn, was present to those supporting me.