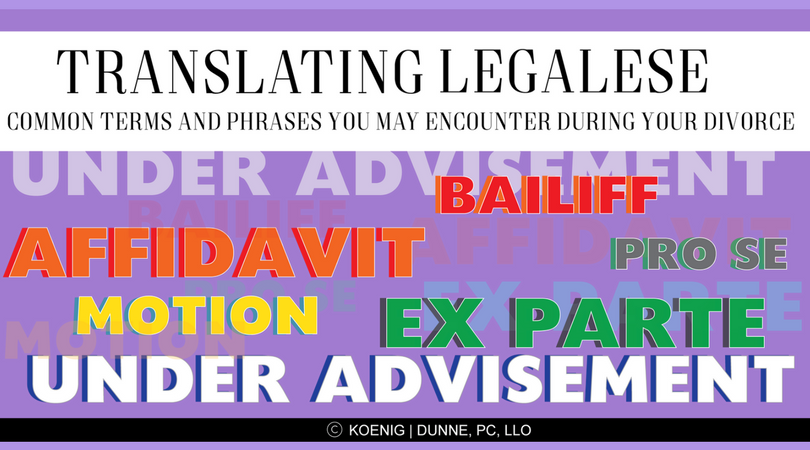 Law has its own language. Here’s some you may encounter during your divorce.

Affidavit: A written statement of facts made under oath and signed before a notary public.

Affidavits are used primarily for court hearings. Instead of listening to live testimony, judges may rely on the sworn statements they receive via affidavits. Affidavits may be signed by the parties or, in some cases, by witnesses. The person signing the affidavit may be referred to as the affiant.

Bailiff: The bailiff provides support for the judge and lawyers in the management of the court calendar and the courtroom. He or she helps schedule court hearings and manage documents given to the judge for review.

Bailiffs are the gatekeepers to the courtroom. Most of your attorney’s interaction with your judge’s bailiff will be in regards to scheduling hearings and/or trial. Bailiffs are also an invaluable source of information regarding best practices for his or her judge’s courtroom.

Ex Parte: Usually in reference to a motion, this term is used to describe an appearance or communication of only one party before the judge, without the other party being present.

For example, you may seek an ex parte temporary custody order seeking emergency custody immediately after you file for divorce, if the circumstances are such that you fear for your child’s safety when he or she is with your spouse.

Motion: A written request to the court, such as for temporary child support, alimony, custody, or restraining orders.

Motions can also be used during the discovery phase of your case. For example, if one spouse has not timely provided his or her information, the opposing counsel may file a motion to compel discovery responses.

Pro se: This term refers to a person who represents himself or herself without an attorney. “Pro se” translates to “on one’s own.”

Pro se people are commonly being referred to as “self-represented litigants.” The terms are interchangeable.

Under advisement: This term is used to describe the status of a case, usually after a court hearing on a motion or a trial, when the judge has not yet made a decision.

When navigating the judicial system, it is important to have an advocate who communicates clearly. Your Koenig│Dunne attorneys are well-versed in legalese. We will help you understand each step of your divorce process, even when those steps appear to be in a foreign language.